On Sunday, March 24 our two wonderful professors, Francis Landy and Andrew Gow provided a spirited account of the dispersion of the Sephardic Jews: how it had occurred in two phases and how this had resulted in the existence of two very distinct types of Sephardic Jew. END_OF_DOCUMENT_TOKEN_TO_BE_REPLACED

Pre-Isabellan medieval Spain lived on in the post 1492 Sephardic diaspora: in the 1920s a Spanish envoy remarked on the “purity” of the “Castillian” (Ladino) he encountered at Thessalonika in the 1920s. The Sephardim “worlded” an alternate or parallel Spanish empire, an empire consisting not of military conquest and oppression, but of a shared language and culture—a largely urban constellation characterized by commercial and intellectual vigour, an urbane and relatively relaxed religiosity (if not downright, apikorsut), and a simultaneous openness and clannishness that preserved such communities in splendid separation, whether in Salonika, Amsterdam, London, or New York, until well into the 20th century.

Andrew Gow is a historian who has followed his family to Victoria to retire after a career of research and teaching about pre-modern European culture and religion at the University of Alberta (and elsewhere). He has written all the books and articles he cares to publish, and continues to edit both a series of scholarly monographs in his field and an 18-volume scholarly reference work on pre-modern Europe.

Francis Landy is a biblical scholar who has recently made his home in Victoria, after a career of over thirty years at the University of Alberta. He is a member of Congregation Emanu-El. He has published a number of books and many articles, and is in particular a specialist in the poetry of the Hebrew Bible.  He has written on the Song of Songs, Isaiah, Hosea and other books, as well as the theory of the study of religion.

Despite the snow, about 100 people participated in the Sephardic Celebración at Congregation Emanu-El last Sunday afternoon. Betsi Boeno led off the program with a joyful presentation about Turkey and Sephardic Jews. Kouskous followed her with their earthy, sensuous Sephardic music and the afternoon wrapped-up with a buffet of tasty Sephardic delicacies. Mazel Tov for a delightful afternoon goes out to Betsi, Amber & Gary, the volunteer cooks, Rosalind & Yaaqov and their brigade de cuisine, Betsi, Amber, Ruth, Dahlia, Frances, Ellen & Rene and the Adult Education & Communications teams.
For more photos… (Penny Tennenhouse, Frances Rosenberg) 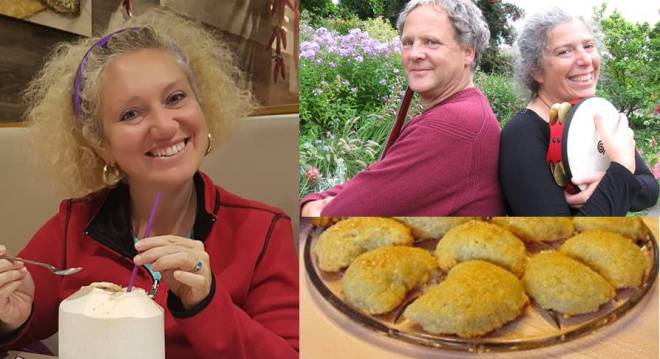 Sunday, February 10, 2019 2:30—5:00 pm — Join us for a fun celebration of Sephardic Jewish Culture. Come learn about the history of Turkish Sephardic Jews, sample Sephardic foods and listen to Sephardic Music at Congregation Emanu-El on Sunday, February 10 from 2:30 to 5:00 pm. This is the third presentation in the Exploring the Sephardic Legacy series. END_OF_DOCUMENT_TOKEN_TO_BE_REPLACED

On Sunday, November 25 Rick Kool held the audience captive with the intriguing history of the Amsterdam Sephardim including his own family which, on both his maternal (Waas/Vaz) and his paternal (Henriques Pimentel) sides, made the journey in the late 16th/early 17th century from Spain and Portugal to the Netherlands. Thank you, Rick!

Sunday, November 25 at 2:00 pm — Congregation Emanu-El Adult Education team invites you to the second presentation in the Exploring the Sephardic Legacy series on Sunday, November 25 in the synagogue at 1461 Blanshard Street when Dr. Richard Kool will present.

In 1675, the largest synagogue in the world opened in Amsterdam. This building, the crown of the Amsterdam Sephardim, stands as a monument to the success that this community, formed of religious refugees including families that spent three or more generations as crypto-Christians in the Iberian countries, was able to attain in the tolerant Dutch republic. The presenter will talk about the Sephardim of Amsterdam including his own family which, on both his maternal (Waas/Vaz) and his paternal (Henriques Pimentel) sides, made the journey in the late 16th/early 17th century from Spain and Portugal to the Netherlands.

Dr. Richard Kool is a member of Congregation Emanu-El’s Board of Directors since 2001, and has served as secretary, vice-president, member at large, and cemetery director. Rick immigrated from Boston to British Columbia in the early 1970s, came to Vancouver Island to work at what was known then as the BC Provincial Museum in 1978, and has lived in James Bay ever since. He is now a professor in the School of Environment and Sustainability at Royal Roads University.

The first session of our Exploring the Sephardic Legacy series opened on Sunday, October 14 when Shamma Boyarin delighted a small but fully engaged group in a highly interactive session on Sephardic poetry. The excursion lead by Shamma began with the poetry of Shmuel Ibn Gabirol and the words contained in the headline. All present appreciated Shamma’s knowledge of and love for his subject. Kudos, Shamma!

In the next session of the series booked for Sunday, November 18 at 2 pm, Rick Kool will talk about the Amsterdam Sephardim from whom he descends.