At the AGM held on May 23, 2018, the Congregation Emanu-El Board of Directors was reconstituted following the election of new members. The meeting thanked Judith Belton, Jean Dragushan, Susan Watt and Joyanne Plewes, who were stepping down, for their service to the congregation.

END_OF_DOCUMENT_TOKEN_TO_BE_REPLACED

On June 2nd our synagogue becomes 155 years young. Celebrate this special anniversary with an egg shaker (ganzá).
What is it? It’s not a food, or a dance. It’s a percussion instrument small enough to fit in the palm of your hand that you shake – much like a maraca. It’s fun and easy.
Egg shakers make wonderful gifts and souvenirs and are a way to remember our congregation’s 155th anniversary. They are available in the Simcha Gift Shop for $5.

Sunday, April 15, 11 am – noon, Victoria Jewish Cemetery — You are invited to the annual remembrance of Yom HaShoah (Holocaust Remembrance Day). This year’s commemoration will take place on Sunday, April 15, 11 am – noon, at the Victoria Jewish Cemetery on Cedar Hill Road (south from Hillside Ave.). We will be remembering those who perished in the Holocaust not as victims or statistics but as the unique individuals that they were. We also honour the strength and resilience of survivors. We know that for the safety of all people the lessons of the Shoah and events leading up to this tragedy cannot be forgotten.

This year’s commemoration is subtitled “Our Stories” and we will hear the family stories of survivors some of whom are buried in Victoria’s Jewish Cemetery. In this way we truly honour their memory. There will be music and songs of that era, to move us and also to remind us of the flourishing cultures in so many of the locations tragically upended by the Shoah. As well, the memorial prayers and reflections will help us to think about how we can act today. We must not only remember those tragic events but must not remain silent in the face of injustice and, instead, stand together whenever any person or group is targeted for their beliefs, religion, race, sexual orientation or disabilities. Our Pledge of Mutual Respect and Support will be read for all to voice their commitment to these principles.

We invite you to share in this event with us. We welcome your presence and support as we gather to remember the past and look towards a future of peace and unity.

April 12, 15, 16, 17, 19 & 22 — Bēma Productions proudly announces the Canadian premiere of Lessons, a thoughtful, compelling play by Wendy Graf about finding faith and love in a sometimes violent and alienating world, in the sanctuary at Congregation Emanu-El on April 12, 2018. The play will run for six performances.

Lessons is performed by Christine Upright (last seen as Edna in Bēma’s Prisoner of Second Avenue) and Alf Small (Horowitz and Mrs Washington). Zelda Dean directs. When Ben finally decides to have a Bar Mitzvah (at his age!) he hires Ruth, a Rabbi who’s lost her faith, to tutor him. The two characters forge a friendship as they each search for healing and forgiveness while wrestling with their own deep-rooted problems. Lessons is a touching, funny and poignant drama that asks the question: Can we find healing and forgiveness when our beliefs are questioned?

All performances will be taking place in the Sanctuary at Congregation Emanu-El.

“A blend of wit and wisdom, “Lessons” questions, amuses and beguiles. Graf is in the long tradition of Jewish writers that include Neil Simon. And, very much like Simon, she mixes the angst in our lives with an overlay of humor that is both touching and tender.” – Ed Kauffman, Hollywood Reporter

“This quest for faith—in his case, a faith he’s never had, and in hers, a faith that she’s forsaken—is a poignant plea that touches everyone,” – KABC Radio

Wendy Graf is an award winning playwright whose plays have been produced throughout North America. “Lessons” was first produced in 2004 by West Coast Jewish Theatre and The Group at Strasberg in West Hollywood. 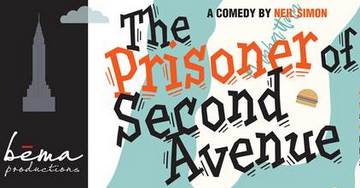 Tickets are $20 each available from Ticket Rocket www.ticketrocket.co or at the door.

Mel Edison is a well-paid executive of a high-end Manhattan firm which has suddenly hit the skids and he gets the ax. His wife Edna takes a job to tide them over; then she too is sacked.  Compounded by the air pollution killing his plants and with the walls of the apartment paper-thin, allowing him a constant earful of his neighbors private lives, things can’t seem to get any worse…then he’s robbed and his psychiatrist dies with $23,000 of his money.  Mel does the only thing left for him to do – he has a nervous breakdown and it’s the best thing that ever happened to him.

“A gift for taking a grave subject and, without losing sight of its basic seriousness, treating it with hearty but sympathetic humor…A talent for writing a wonderful funny line…full of humor and intelligence.” New York Post

“Creates an atmosphere of casual cataclysm, an everyday urban purgatory of copelessness from which laughter seems to be released like vapor from the city’s manholes”. Time

“I am two of your characters.” An animated Ben Levinson approached me after the final performance of The Original Deed last Sunday. “I was the one who crawled up into the attic and I was one of those who searched for land for a new shul.” END_OF_DOCUMENT_TOKEN_TO_BE_REPLACED

Saturday & Sunday, November 18 & 19 at 7 pm — are your last opportunities to see Zuzana Macknight as Rivka Abelman, wife of the lead character in the play The Original Deed by Sid Tafler currently running at Congregation Emanu-El synagogue.

Tickets are available at Ticket Rocket $20 for adults, $15 for students and will be available at the door. END_OF_DOCUMENT_TOKEN_TO_BE_REPLACED

This year’s commemorative event for Kristallnacht took place on November 9, 2017 at Congregation Emanu-El synagogue and was attended by over two hundred people from various and diverse backgrounds. In addition to the Jewish community, the attendees included leaders from the Christian and Muslim faiths,  law enforcement, First Nations and government. END_OF_DOCUMENT_TOKEN_TO_BE_REPLACED

December 8 – 10 weekend – Together with the Religious Services Committee we are planning an exciting Shabbaton Weekend with a visiting Scholar-in-Residence, Rabbi Tsafi Lev who is Rabbi Harry’s study partner.

The Original Deed, an historical drama about Congregation Emanu-El shul will be staged in the sanctuary on November 15 (with opening night reception), 16, 18 and 19 at 7 pm. Tickets are available at Ticket Rocket $20 for adults, $15 for students. and will be available at the door.

To win a pair of tickets to the last show on Sunday, November 19, enter the contest sponsored by the Jewish Independent newspaper. Just “share” and “like” The Original Deed on Facebook — the contest closes November 12 at 10 pm.

The Original Deed is a story about the struggle over the synagogue that starts between a father and son and spreads through the whole community, including the school kids.
For more on the play, read the feature article in The Jewish Independent:
http://www.jewishindependent.ca/what-if-shul-had-been-sold/